In this post I'll cover the techniques used in our game "Jabberwocky" for the Astrojone gamejam a few months back. Credits again to Rhoq for the artwork, Robyn for the music and Retroshark for the cover art!  Talking about the game's mechanics will contain a few spoilers, but I'll try to keep it as minimal as possible. If you'd rather play it first, do so here and then come back!

The possibility space of a game is the pool of potential actions a player can take at any one time. Think of it terms of the number of actions available from a specific point. Could the player move left? Could they move right? If the game is chess, how different could the game look in one or two turns? In flappy bird, for example, the possibility space is pretty limited. The player can either flap or not flap.

In a game like Super Mario Sunshine, however, there is a much bigger possibility space - where the player can run, jump, and backflip across a large map. There is a lot of choice available to the player. 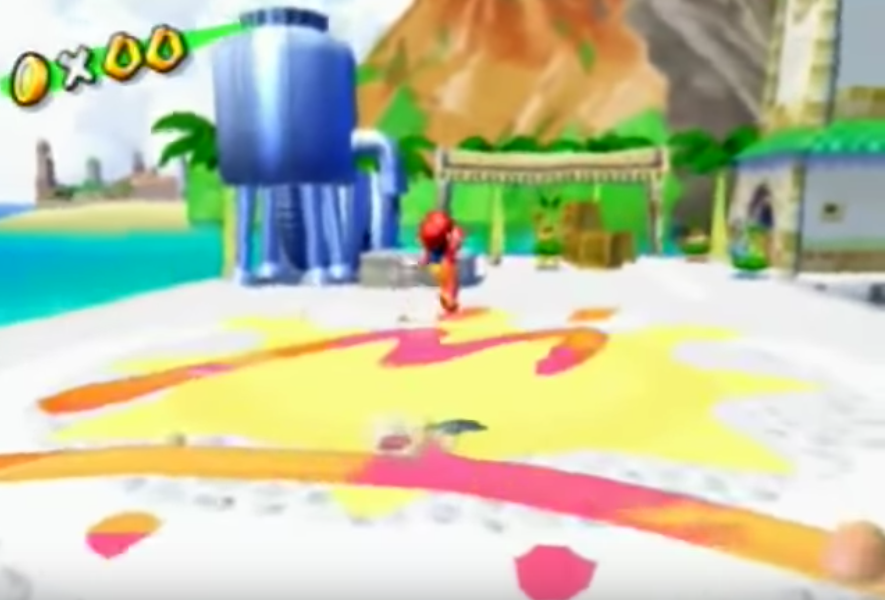 Nintendo's Super Mario Sunshine - You can't go around it, you can't go over it, you'll have to go through it!

Super Mario Sunshine actually has quite a small possibility space to begin with, which  slowly opens up as the game progresses. When Mario arrives, the player has a small space to move around in where they encounter damaging goo which blocks the path. The player has few options, so takes those that are available - like walking through the goo, which teaches the player about its traits. When this learning experience is over, the game adds more abilities and introduces them in similar ways.

Nintendo are infamous for using a restricted possibility space as a tutorial tool. The opening to Super Mario on the NES is one of the best examples of this - limiting the player to stand still until they get hit by a goomba, run forward and get hurt by a goomba, or jumping over it or onto it. If you're interested in the theory behind the design of world 1-1, check out this video for Eurogamer where Shigeru Miyamoto and Takashi Tezuka walk through their design decisions.

Why reduce the possibility space?

Have you ever played a game where the environment was littered with collectibles, secrets and side quests and you never felt that you could (or wanted to) complete the main quest? Perhaps this game was Zelda: Breath of the Wild or The Elder Scrolls: Oblivion. These are examples of games with huge possibility spaces. Having a large amount of things to do in a game can be difficult for developers, who have to code interactions and create art, and simultaneously liberating and paralysing for players. When you can do anything, what should you do first?

I'm painting with very broad strokes here. Both the games mentioned above have possibility spaces which fluctuate wider and narrower as the game progresses. Zelda: Breath of the Wild starts off in one small room with a few ledges and crates for the player to experiment with. The Elder Scrolls: Oblivion starts off with the player locked in a prison. Clearly having a narrow possibility space is very important. But why? Let's examine the tools first, then how they're used.

Tools in the toolbox

There are a few simple methods for controlling the possibilty space in Jabberwocky: 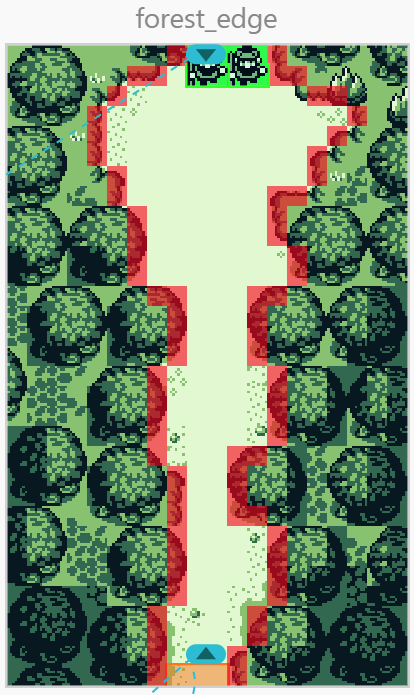 The long path the player starts on introduces tiles you can't walk on, as well as directing the player in one direction - south

Jabberwocky also makes good use of the old 'barred passage' technique which you see in many gameboy RPGs. You know the drill for these: 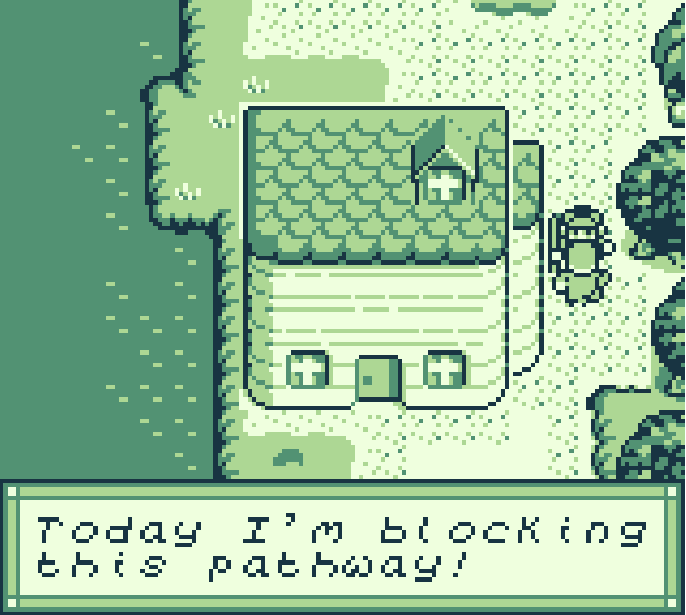 A guard blocks a pathway arbitrarily until the story has progressed

It's possible to restrict which buttons can or can't be pressed. Mostly this is in dialogue where you limit the player's ability to pressing 'next' or choosing from a couple of options. 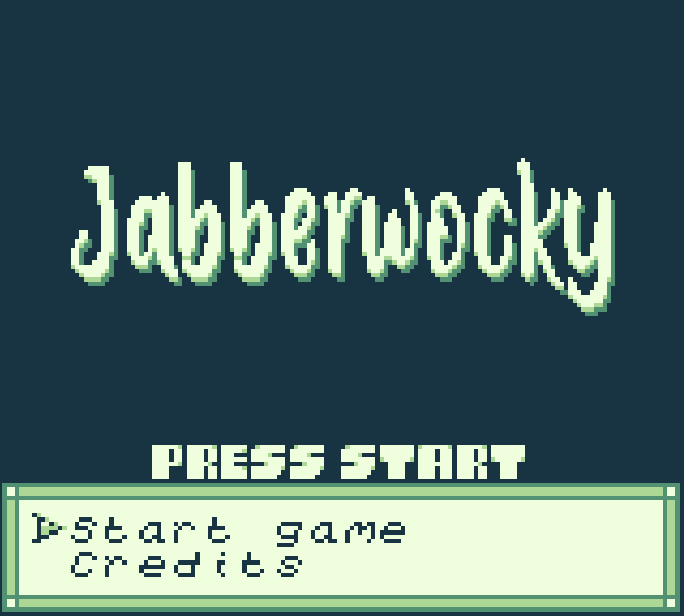 The start screen has two options - start game and credits. (It actually has four options if you include 'wait' and 'turn off game')

These tools in practice

Controlling the story and pacing

Areas with relatively little to explore can speed up the story's progress, whereas areas with lots of choice can act as a break from the narrative where the player can explore and relax. Jabberwocky starts off fast paced - with a narrow possibility space of pressing A to move through dialogue, funneling the player into a narrow corridor between trees into town. When the player arrives in town, the possibility space opens up, allowing the player to explore and learn about the setting at their own pace. The player is still directed forward through the use of path blocking and the general flow of the layout, but they can make small branching visits to the houses and shop and talk with NPCs along the way.

Encouraging the player to explore the current area

In Zelda: Ocarina of Time, the player starts in the small Kokiri Forest village. Before they can access new areas they have to complete a task in the one they're in. 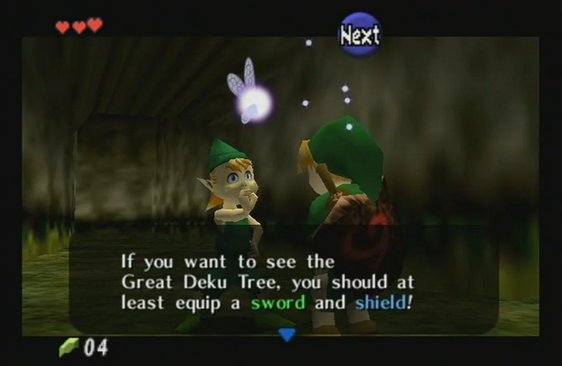 In Zelda:Ocarina of Time, You can't see the Great Deku Tree without a sword and shield

Limiting the player's options like this is a great way to push them to be creative with what they have available. Eventually the player needs to crawl through a small hole in the wall to find their sword - something most players might have missed if they were allowed to go anywhere they wanted.

This limitation of movement can encourage the player to take a closer look at their surroundings and help them spend their attention on the things the game developer wants them to. In Jabberwocky, the player is prevented from backtracking at several points to keep them focused on the challenge ahead and preventing them from re-reading old dialogue or becoming overwhelmed with the space.

Implying a bigger space without lots of extra content creation

Reducing the amount of ground a player can cover helps keep them focused on the task in hand, as well as allowing them to fill out the rest of the game with their imagination. At the beginning of Jabberwocky, the player is introduced to two guards who are being rescued from the forest. The player never sees the forest, but the characters and dialogue paint a vivid picture of it being a wild and dangerous place. It's implied that the player could go there and that it exists in-universe without the map maker or artist needing to create the space. 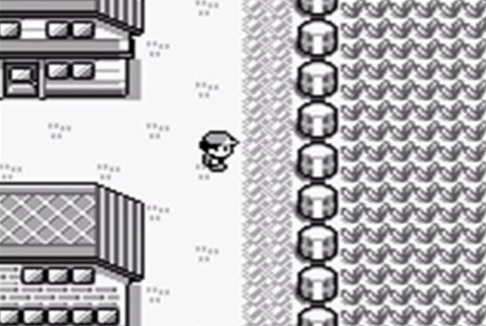 Who hasn't spent ages looking out over the stone walls of Palette Town in Pokemon Blue, imagining what lies beyond? 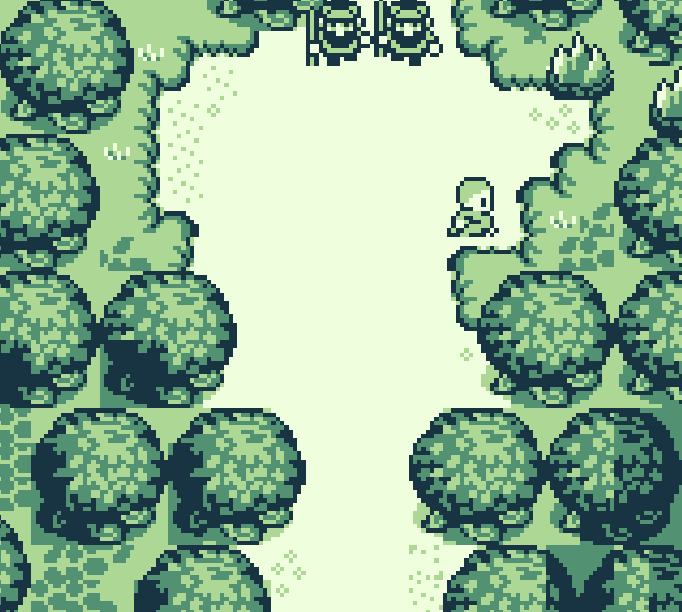 Screenshot from Jabberwocky - maybe, if I get close enough to the edge I might see the Jabberwock.

The design of Jabberwocky is meant to evoke a feeling of destiny and inevitability. The player character is the chosen one, after all. By taking away some of the player's options it really drives home that this is a task the main character must do. Conversely, games like Pokemon Red and Blue have a very wide possibility space, where it's optional to continue on the main story. You can have a lot of fun just exploring and training up your pokemon and trading and collecting with your friends. A game which I've played recently, "The Liberation" by StephaneF, makes good use of a limited possibility space. In the game you have to betray your friends in order to continue the game. There is no option to betray only some, and no option to not write the letter. You can really feell the force of your interogators pushing your hand.  try to 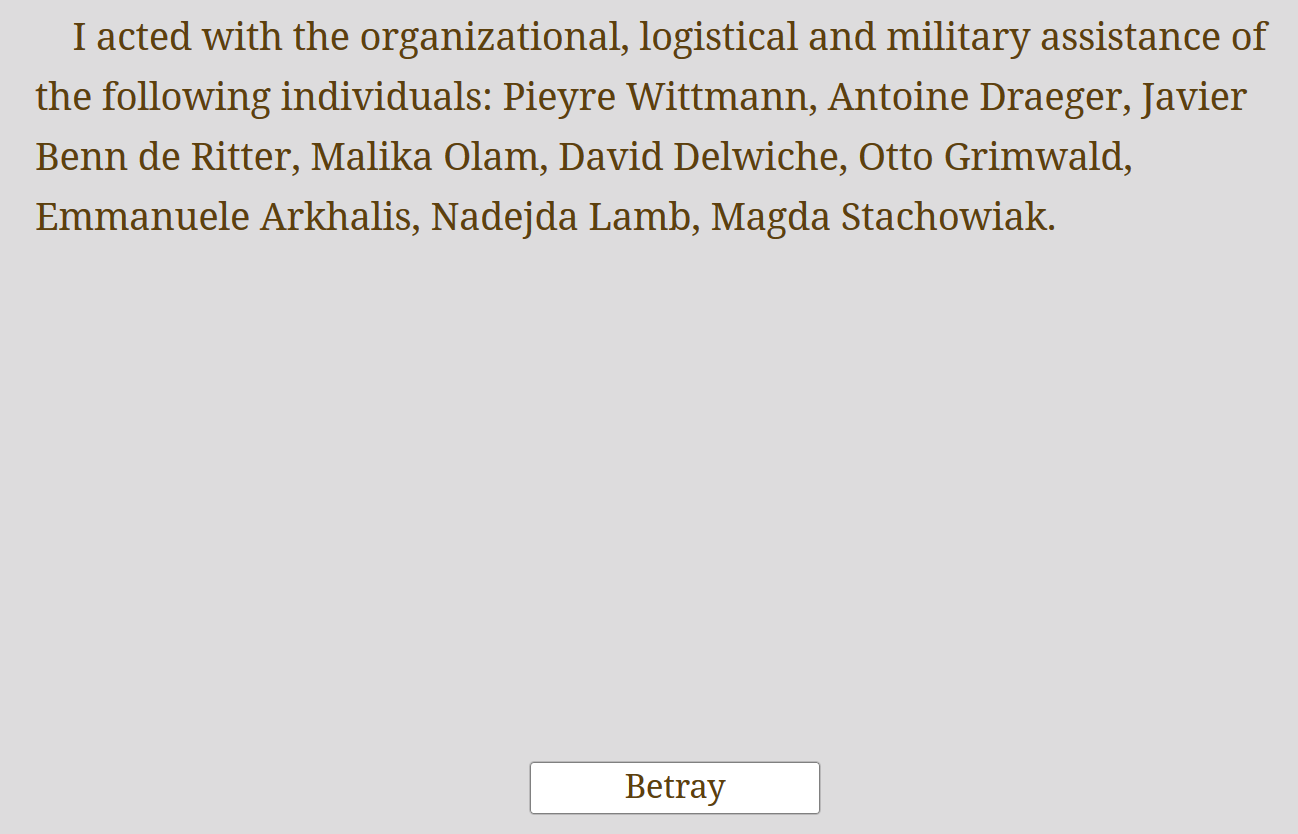 The Liberation by StephaneF forces the player's hand to betray the character's friends.

Jabberwocky was a fun exercise in narrowing and expanding the possibility space, but I hope it shows to you how powerful this underlying theory is. Changing what your players can do changes the way they play and experience the worlds you're creating. I encourage you to play again with these techniques in mind to see how the available paths open and close for the player. I also encourage you to try to backtrack and speak to the NPCs a second time after you've spoken to the old man and the game wants you to go to your house. Really try and break it. You might be pleasantly surprised.

Thanks for reading this article on possibility space! If you enjoyed it and you'd like to fund me in doing other creative things, I've literally just this week set up a Patreon. It funds things like gamedev, pixelart, writing and textmode art. Please do have a look by clicking the big button for more information (or this link).

Is there anything I missed out here? Was anything unclear in the article? Please let me know in the comments. Thanks!

A very interesting article! I've never heard of "possibility space" before but i'm kinda familiar with the ways to control, to manipulate (to an extend) the player's behavior and it's always nice to gain some knowledge on the subject. You explained it well and backed it up with world known exemples to make it clearer. I once heard that the best way to test your comprehension of a subject is to teach that subject to someone who's unfamiliar to it. You prove that point!

Thank you for your article. This will be a good opportunity for me to give Jabberwocky a try :)

You're welcome! Did you get around to playing? :)

Great read! I liked the bit about gazing at the edge of the woods as a comparison for looking over walls in Pokemon or similar games which imply an expanded world that can't be seen at certain points. I definitely have an image of the Jabberwocky fight in my head, but hadn't considered what else a player might imagine is lurking out there in the forest.

I have a lot to say about implied worlds, but I didn't want to go too off track. There are a lot of techniques you can use to imply an extended world without having to create it.