SLUDGE & SORCERY is an irreverent fantasy Gameboy RPG; an expansive overworld journey from the Slime Caves to Jagged Crag, with dice-based combat, treasures, and humour. This game was made for GBJam 8, and runs under the specific hardware restrictions of the orginial gameboy, and was created entirely from scratch in 9 days using GBStudio.

With thanks to:
Ravancloak,
Chris Maltby and the team at GBstudio,
and You, the player!

I just stumbled across this genuinely fantastic little gameboy game, and I have to say it really blew me away, especially for a game made in only 9 days!

Spent an hour or so completing it on actual hardware and it was a delight from start to finish, the first thing that struck me was the beautiful art, then the gorgeous music (boss music was a standout), not to mention the hilarious writing that took unexpected turns which had me laughing out loud a few times.

The mechanics themselves felt polished and really well-balanced, I like my rpgs on the harder side so I can understand how it wouldn't be for everyone, but I very much enjoyed grinding out a few battles and min/maxing my goo spendature throughout to always have max goo before the final battles (which was definitely overkill I realised in hindsight lmao, didn't affect my enjoyment whatsoever as that was on me)

Tl;dr it made me laugh n feel things so Good Game 5/5

But the RNG in the fights is sooo brutal. I am using real hardware, so I don't get to use save states. I have attempted to beat this a few times now and every time I get completely beat down and run out of goo.

The combat system is really well thought out in nearly every respect - it feels nice watching the dice roll, and deciding how much goo to use in combat adds enough interest to an otherwise chance encounter. But the odds are stacked heavily against the player with the enemy handicaps to the point where I am just getting too upset at the unfairness of the encounters - and don't want to continue playing.

Please consider adjusting the balance by adjusting the handicaps (this most of all), giving more goo out on successful attack, reducing goo required to run or finding more buffs, more frequently.

It's a great game but it sucks when the player is failing because of chance all the time. The perception of fairness is big deal, some games even change the probabilities of battle outcomes when the player is close to death - just so the player feels the excitement of coming back from the brink of death! No reason why you cant change probalities behind the scenes when health = 1 or 2, for example.

The battles would benefit from a way to gather more goo during combat since running out of goo is a death sentance. Could you put a third option in on top of Fight and Run? What about 'Focus energy' or something to that effect, where the player takes a negative handicap on their dice roll for a turn so they can focus on gathering a set amount of goo for use in the fight?

There is also a situation where the player starts a battle and is asked how much goo they wish to use in order to tip the dice roll in their favour during combat. But on the first roll, the player hasn't seen the handicap yet and therefore doesnt have enough information to properly decide what to do. They are going into the battle with their eyes closed. Perhaps consider showing the handicap before the battle begins so the player has all the info they need before they commit to fighting.

Some things to think about. I really like the game. Maybe one day I'll be able to beat it without save states and/or grinding that mushroom enemy at the start over and over for his goo (that sounds gross out of context)!

The team and I can't agree with you more - there is a flaw in the mechanics which makes it very mathematically biased. In the nine days we had to build we didn't have time to extensively test the mechanics. There are a few things on the list of changes we need to make, and I really appreciate the list of ideas you've compiled for us. One of the changes we proposed was making both sides take damage in a draw to accelerate the conclusion and to embellish the lucky rolls by making them more decisive.

I hope to get back to tying up these loose ends once I'm available again.

As an aside - and by no means do these excuse the needed repairs - there are some poorly communicated strategy options hidden in the game which I added in the last two hours of the jam. The chests where you get upgrades will gather goo after they've been opened, and increase by 3(?) after each successful combat. That's at least partially useful for improving reserves. I think I also found that dying doesn't drain your goo to zero, so you can take risky no-goo approaches to try to build up your collection. The mushroom grinding has definitely been part of my strategy when playing through.

Statistically speaking, it seems beneficial to always boost to six, at least until you've gathered enough boosts to your stats.

Thanks again for your thorough feedback. It'll be a while until I'm able to make these changes, but I look forward to letting you know when I've been able to make them. It'll be good to have the game play as it was intended., and for people to be able to fully experience all the dialogue and character art. :~)

Amazing game, but I think those consecutive 3 enemies are too unfair. At the first map I grinded the goo with the first enemy so there was no problems. Started the second map w about 45 goo and even though I spent 6 goo on every turn, the skeletwin outgooed me and got me killed. Since it is a long way, I'd recommend putting a checkpoint at the start of the second map, and like another farming point, or a way to go back. The game is awesome, took lots of inspiration from it. Great use of the color palette.

What a great game, the system used in the battle surprised me, now I'm sure that amazing games can be made at GB studio!

The battle system was a difficult balance of combining different screens and sprites, but well worth it. The team has been discussing adjustments to it for a revised version with "fairer", quicker combat.

Oh this totally slipped past me! Looks and sounds great!

I've heard there's a few complaints about dialogue speed, and wanted to let you know the latest development build on GitHub (soon to be called 1.2.2, not the v2beta) has slight improvements, like script performance, and a secret, holding B will speed up dialogue a bit! Might be worth trying.

Also a little surprised you didn't add a save function, as it should be quiet easy to auto save when you sleep in game, and a menu event instead of multi choice on the title screen.

Originally there was a save function, but the built-in save function in GBstudio would save some variables but not others. We couldn't overcome the bug so we removed it entirely.

It's a shame, because it's quite a long game. Playing it on emulator means you can quicksave, and that is enjoyable.

Without the saves it made the game more punishing, so we made death less damaging. In this build it just resets you to the first campsite :~)

Combat is innovative, art and soundtrack is nice, I think the map is well thought out for a short game, the story is a masterpiece, and I think this would be a success on a GameBoy in a GB time so...... Great Game!

This is the best GBStudio game ive played! GREAT JOB!

★★★★ Just perfect ... the only thing that bothers me is repetitive music in a few moments and the time it takes for me to speed up the dialogue

I would've liked the dialogues to be quicker. Unfortunately that was a restriction of GBStudio. Thank you for playing :)

Oh yes, I used GB Studio, don't worry about it, the game is incredible, a shame you can't get a cell phone due to the lack of exportation for bundle, is great job and I hope you get good donations

It works on mobile phones! If you visit the page on your browser it has all the controls available :)

Tried to play, but the dialogs are endless. The only thought is "Please, let me directly to the gameplay! I'm fed up with your dialogs!!!"

The game is pretty heavy on the dialogues at the start. We wanted to break that up but the way the game was coded didn't allow for it. Speaking with Grampy slime is the last big dialogue before combat starts, so if you still have it open I'd recommend continuing!

Also best to get it as a ROM for the emulator so you can use save states.

Interesting game but the randomness feels a little artificial.

Wow, it's so beautiful!

Good lucky in the gbjam! 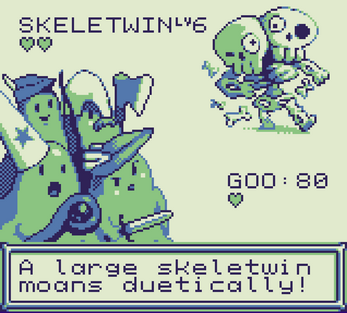 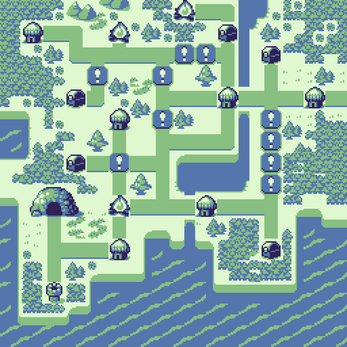 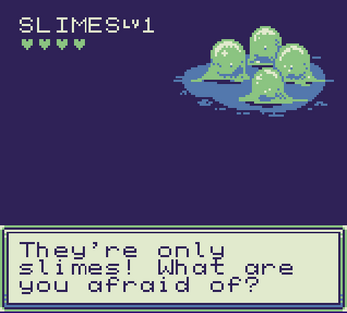